Chinese Medicine During the Summer Season (I) 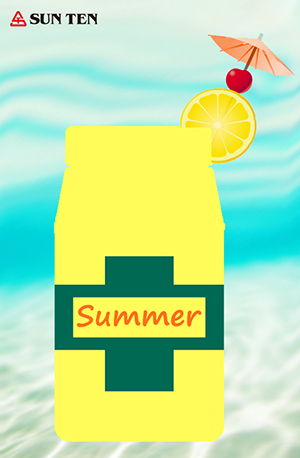 The Huang Di Nei Jing Su Wen describes the summer season. "In the three months of summer, there is an abundance of sunshine and rain. The heavenly energy descends, and the earthly energy rises. When these energies merge, there is intercourse between heaven and earth. As a result, plants mature, and animals, flowers, and fruit appear abundantly."

The three months of summer are governed by the fire element. The heart and small intestine correspond to the fire element and during this time they susceptible to pathology of the fire element such as an excess fire pattern or an imbalance among the five elements. One common example is fire overacting on the metal, which affects the lungs and large intestine in a vicious evil pattern.

The Huang Di Nei Jing Su Wen goes on to offer advise on how to stay healthy during the summer. "One may retire somewhat later at this time of the year, while still arising early. One should refrain from anger and stay physically active, to prevent the pores from closing and the chi from stagnating. One should not overindulge in sex although one can indulge a bit more than in other seasons. Emotionally it is important to be happy and easy-going and not hold on to grudges so that the energy can flow freely."

We can see that the Su Wen is telling us to keep our hearts calm, cool and relaxed in order to prevent the flaring of the heart’s fire, which could be detrimental during the summer months. Because there is an abundance of fire during this season, it will be less taxing on the body to have less sleep or even a little more sex. It’s good to note that while the fire element is abundant, the water will be weak, so caution should be exercised to avoid overindulgence and damage or leaking of the kidney essence.

Adjusting our daily routines and activities is important in terms of living harmoniously with the seasons. It is also important to eat properly by reducing or avoiding foods of one favor while increasing the consumption of foods of another in accordance to the climacteric and elemental influences predominate during a certain season.

During the summer we need to keep the fire element in check and balance. It is also wise to strengthen the metal, which the fire will attack when it is too weak or when the fire is too aggressive. The can be a preventive measure to reduce the vulnerability of the metal element or a therapeutic one if the fire has already done so.

Fire has the tendency damage metal since metal is the element that is controlled by fire. This pathological attack within the five-element structure is a ‘vicious attack”.

Another area of concern, when analyzed via the five-element, is that while fire is exuberant, the water is at its weakest. It is therefore beneficial to take a kidney tonic during the summer to generate and strengthen the water element.

Formulas that balance the heart and kidney may also be considered if there is a pattern of disharmony between the fire and water.

Commonly used formulas that balance the heart and kidney include:

One of the difficulties in staying healthy and treating illness during the summer season is that yin will lie deep in the interior while yang is active and moving towards the extremities and exterior. Because the yin is in the interior and the yang at the exterior, if there is interior cold or excessive yin fluids that yin could accumulate to cause yin conglomerations since the yang qi cannot metabolize it. During the hottest days of the summer, the abdomen will have the tendency to get cold since the yang will expand with the heat.

Therefore, because of the yin and cold, it is advised to avoid consuming cold snacks, cold noodles, cold cereals, uncooked raw foods, and sweetened cold beverages because they can create cold in the abdomen.

Regular consumption of warming tonics, especially in a pill or powder form can warm the interior and help prevent the excessive accumulation of yin and cold. Additionally, it helps to drink warm liquids, eat warm food, keep the portions small, eat more often, avoid overeating, and avoid fatty and greasy foods. One can enjoy warming spices by drinking cinnamon and cardamom tea and cooking with cardamom, ginger, or star anise.

Commonly used formulas that warm the interior include: